Fountain hills celebrated its first Oktoberfest in 1998. Christine and Jack Colley moved to Fountain Hills in 1995 and found many residents who were German speaking and living in the community. Christine and Jack founded the German club of Fountain Hills, and Oktoberfest was the first project in 1997. Some may remember the beautiful 10,000 sq ft tent in fountain park. After the 2nd Oktoberfest the lake liner was replaced and the park was off limits for large events. The event moved to FT MCDowell that year. The German club gave up Oktoberfest after the third year and the Fountain Hills chamber became the next organizer. The event did not fit the chamber strategy at the time and was not repeated.

In 2006, Bryan Hughes the Parks and Recs Manager at the time teamed with Christine to once again rekindle Oktoberfest in Fountain Hills in 2007. Oktoberfest is a labor intense event with over 150 volunteers spending about five months planning for marketing, vendor & sponsor  solicitation, logistics preparation, food and beverage  service and the volunteer coordination. Many service organizations do great work in Fountain Hills and several of them joined this busy work project. The Elks team became partners in food preparation and service with some 40 volunteers at the event. The Amvets began with serving beer, the organization changed gears and the Rotarians took over the job with over 60 volunteer spots. The local girls high school basketball team helped with the clean up that is done today by Rotarians. Phil's Filling station prepares a German Potato salad and assists with the meal preparation. Our delicious apple strudel was prepared by the staff at the Fireside Grill and served by the Sister Cities group. The Kiwanis team is coordinating gate staffing and ticket sales.

The German Band Die Echten Waldbuam fly in each year for this event. Over the years we had the German exchange students enjoy the festival and the local high school band entertained at the opening ceremony when they were available.

Oktoberfest originated in Munich in Oktober 1810 in honor of the marriage of King Ludwig to Princess Therese von Sachsen-Hildburghausen. It was the first time that commoners were invited to a Royal event, it was so popular and is still celebrated at the same location in Munich except during wars and pandemics. Over 7million visitors enjoy the event every year. Due to COVID, it’s cancelled for the third year. Why is Oktoberfest in September? As the Oktoberfest grew in popularity over time, inclement weather frequently affected the two week celebrations and the dates were moved to September because the days were longer and the weather was better. Today the Munich Oktoberfest always ends on the first weekend in October.

Christine Colley is President of Fountain Events Inc, a not for profit organization established to create fundraising opportunities to support the community where she lives. Over the past 12 years the volunteer service organizations have benefitted with over $100,000 for their charities from the Oktoberfest proceeds. I’m proud of having worked with so many great friends and partners to achieve this accomplishment. In 2019 the event was rained out in the park and we quickly created small satellite events for the celebration since the German band was already here. Like many events it was cancelled in 2020. Christine decided to “retire” from Oktoberfest and the Fountain Hills Chamber of Commerce volunteered to continue to host this popular event.  "It’s a bittersweet time for me to give up this activity that I love and I’m happily looking forward to my friends at the Chamber to carry forward this tradition. As an active chamber board member I’ll stay close and continue to provide support where needed." 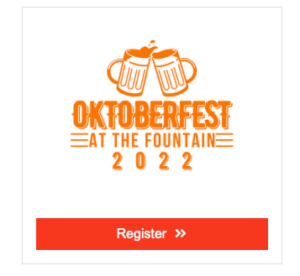