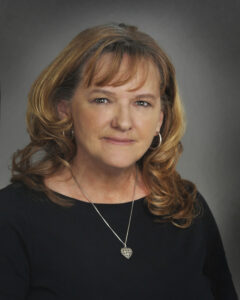 A Northern California transplant, Cherie Koss took over as the Executive Director of the River of Time Museum in Fountain Hills in April of 2017. Her parents were early settlers in Fountain Hills, buying their first lots in the late 1970’s and permanently relocating shortly after.

She is currently guiding the museum through an expansion process designed to position it as a destination attraction here in Fountain Hills. The museum anticipates showcasing a dynamically renovated gallery space in the Fall of 2021.

Cherie spent the majority of her career with the San Diego Zoo where she was the founder and Curator of the “Animal Connection” Department responsible for creating and presenting over 1,000 outreach programs annually.

As Director of Education with the San Diego Aerospace Museum Cherie coordinated the International Aerospace Hall of Fame induction ceremony and also worked with an esteemed team of astronauts, aerospace engineers and business leaders to create a west coast version of the residential “Space Camp” program.

Cherie is married to Doug Waldo, a television host and professional actor. Their daughter Jessamyn recently graduated from the University of Hawaii on Oahu and is an elementary teacher in Seattle.