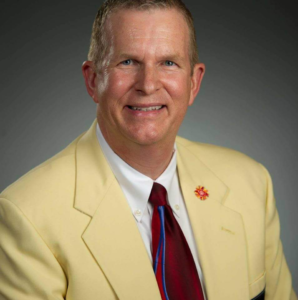 Brian currently works at SRP, Salt River Project, as a Senior Strategic Account Manager for the Government Sector of Key Customers. He manages SRP’s relationship with the municipalities & sensitive customers, such as: City of Phoenix, Mesa, Tempe, Scottsdale, Valley Metro, Phoenix-Mesa Gateway Airport, all of the Native American communities, and many more. Before joining SRP, Brian was a District Sales Manager for Schlumberger and prior to that worked for General Motors as a Regional Sales Manager in the Dallas area. Brian is originally from Kansas where he and his family grew up on a 1,000+ acre ranch, which his family still owns. He attended and graduated from Kansas State University with a degree in Electrical Engineering. Brian also serves on several boards and committees in the community. Brian joined the Board of Directors for the Fiesta Bowl last year, where he has served for over 20+ years on the committee. Brian is Chair of the East Valley Aviation & Aerospace Alliance for the East Valley Partnership, and recently joined the Board of Directors of his alma mater, the Kansas State University Foundation Board. Brian is a Scottsdale Leadership Class 20 Alumni, served as President of the Board in 2011-12 and served as Past President of the Board in 2020-21